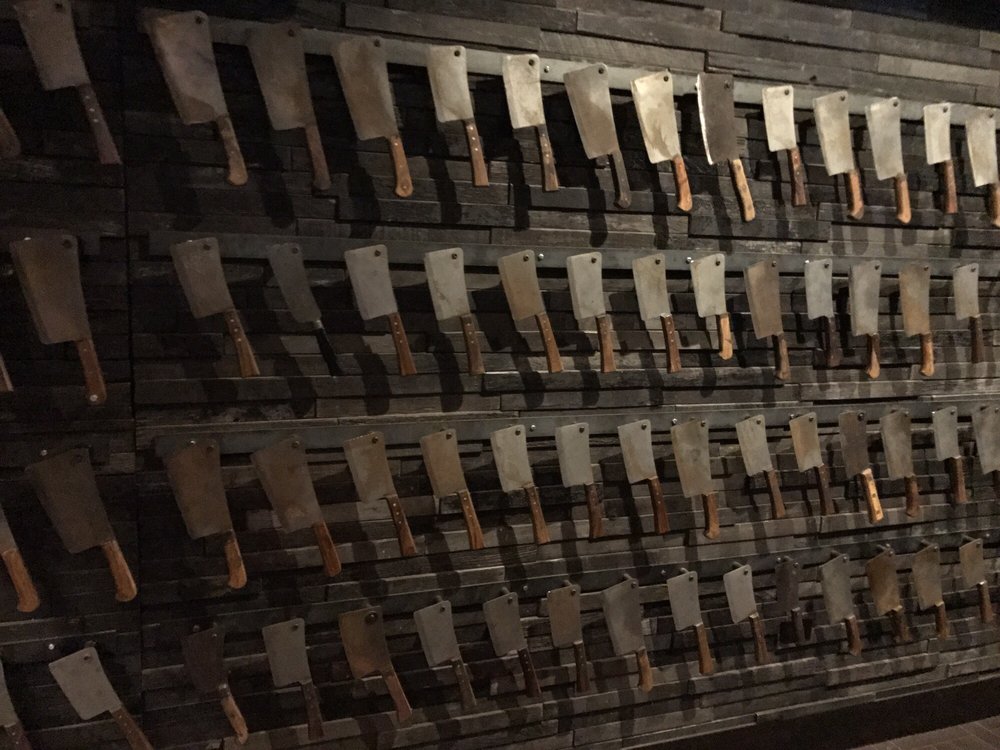 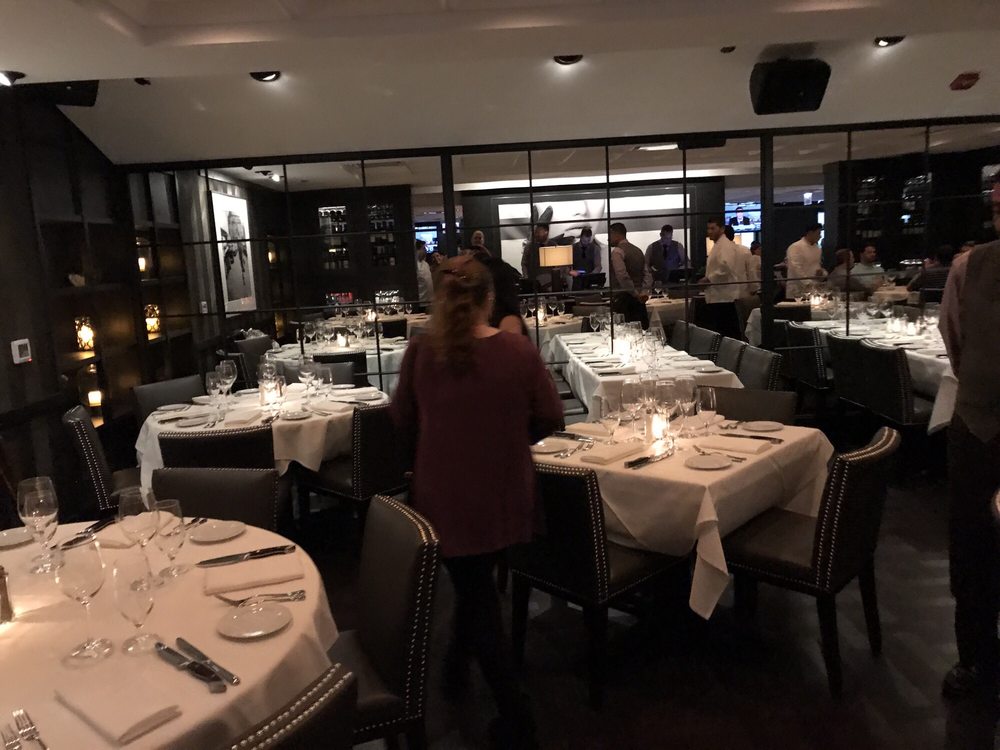 One of many dining rooms 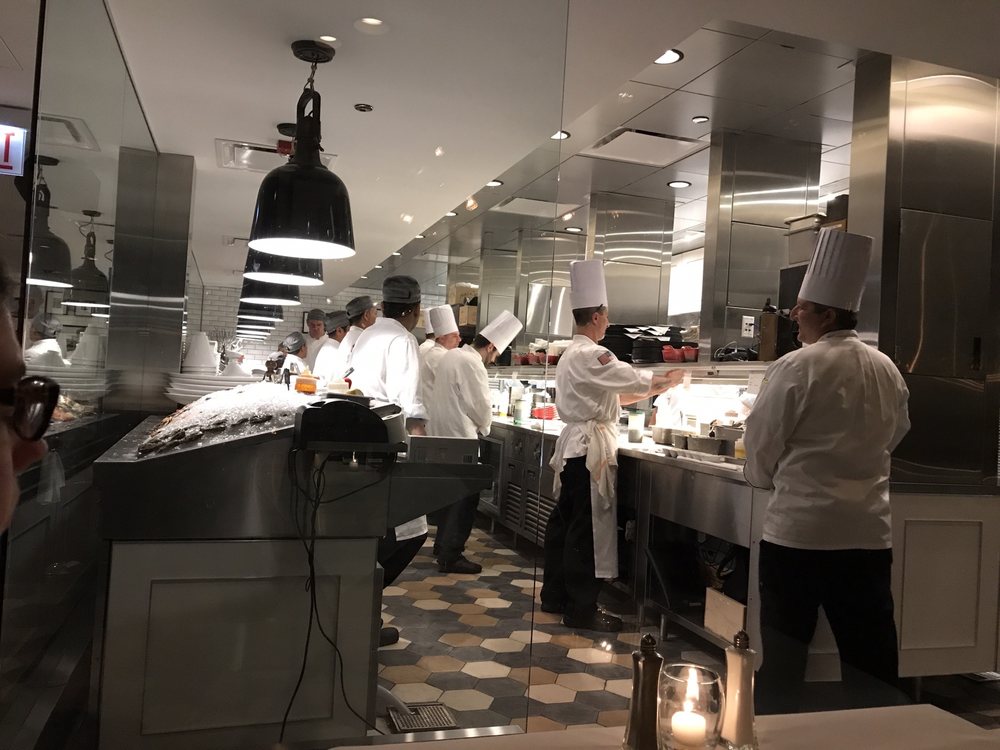 View from private tables in the rear 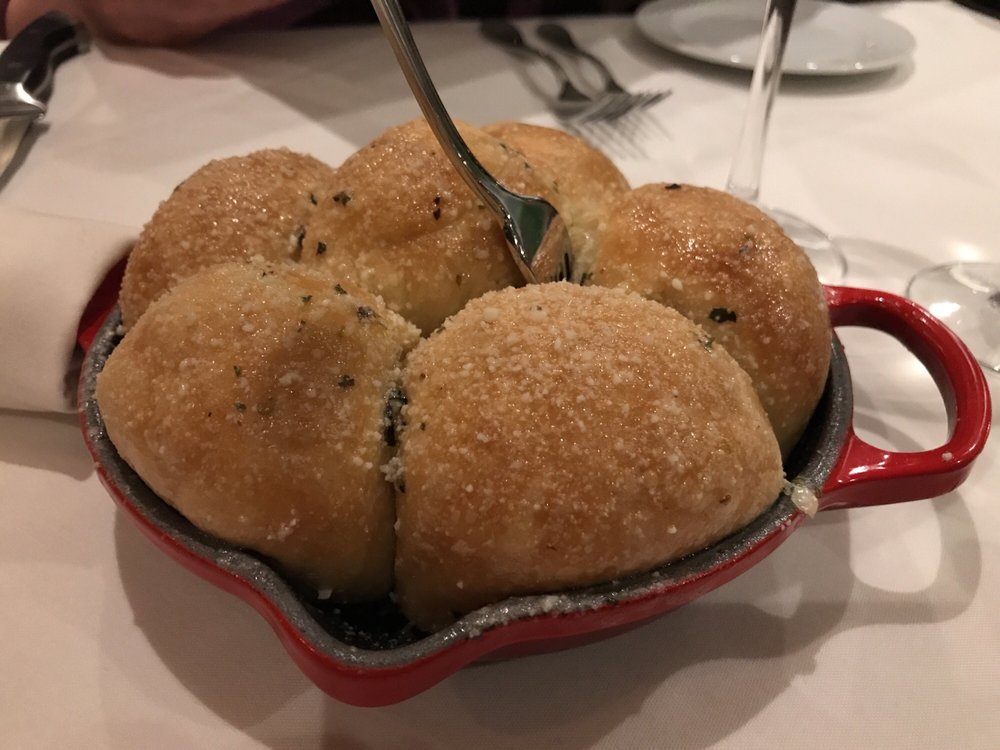 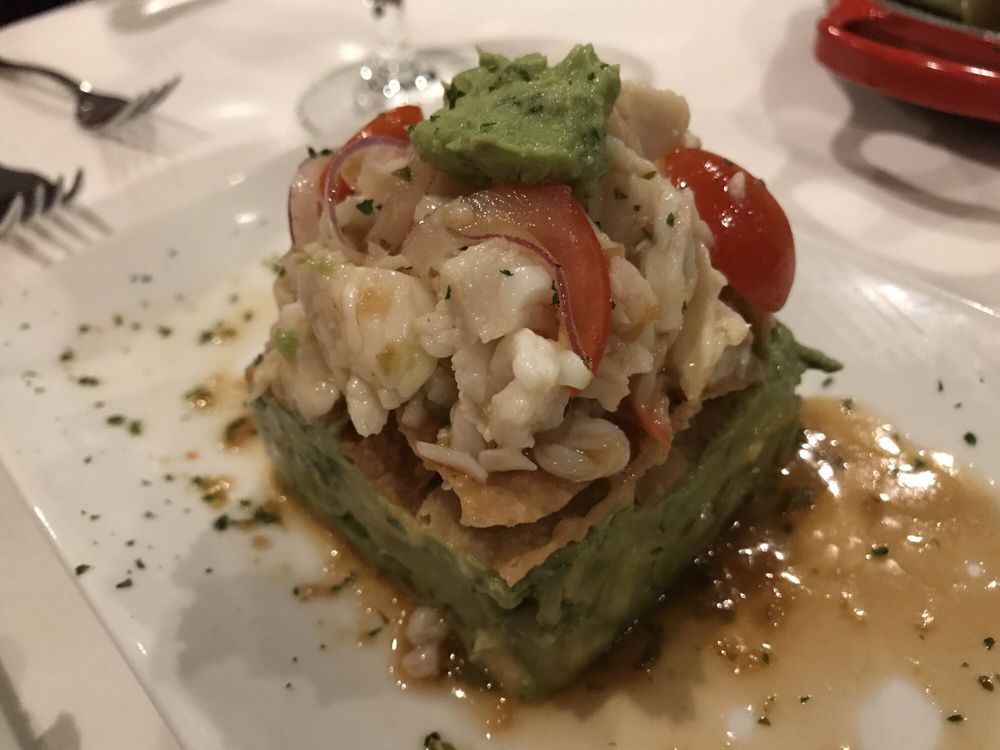 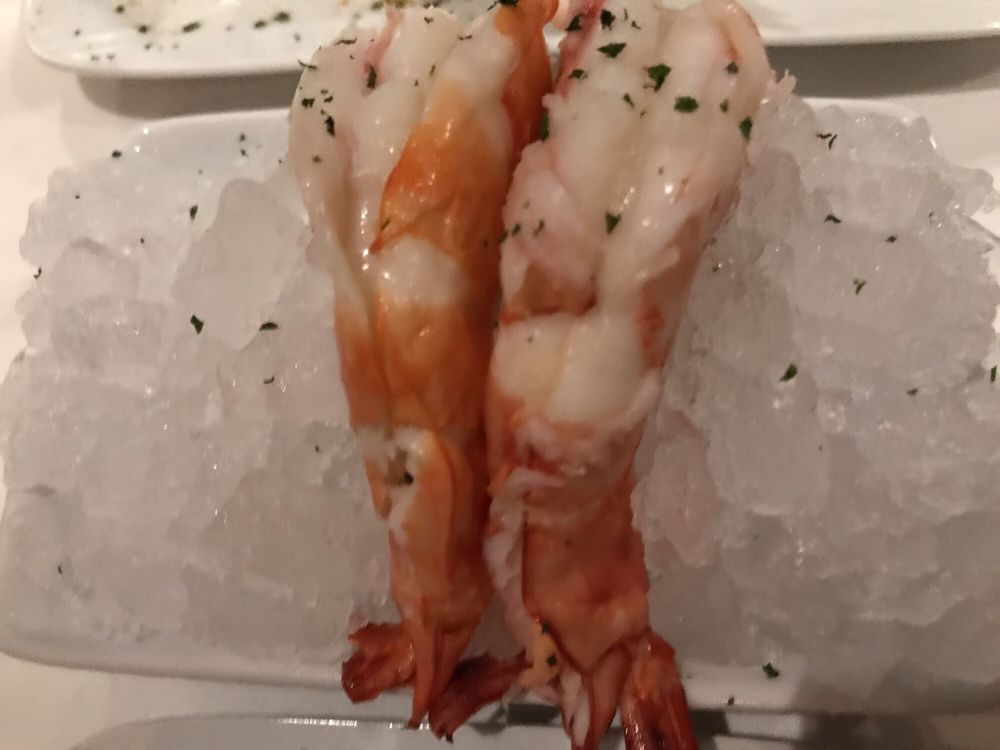 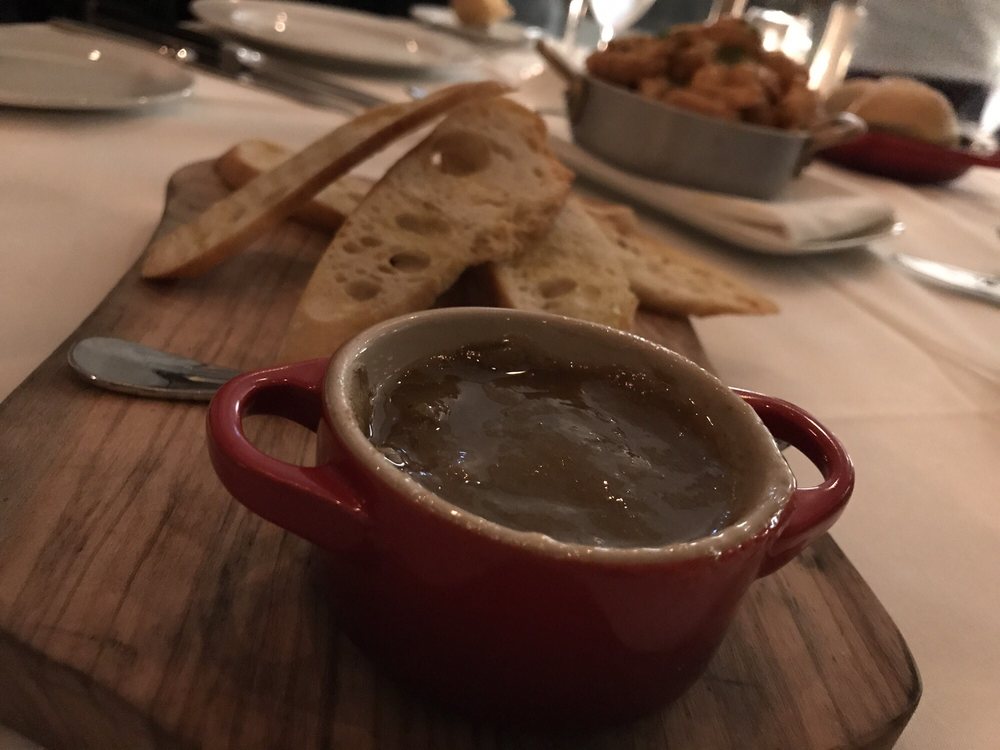 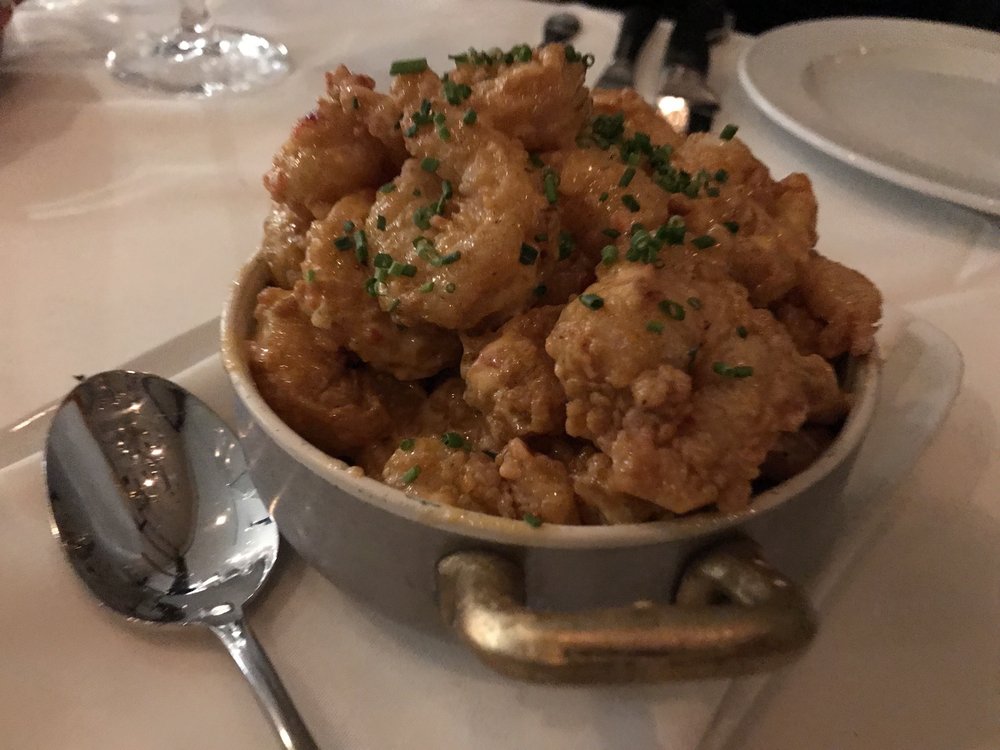 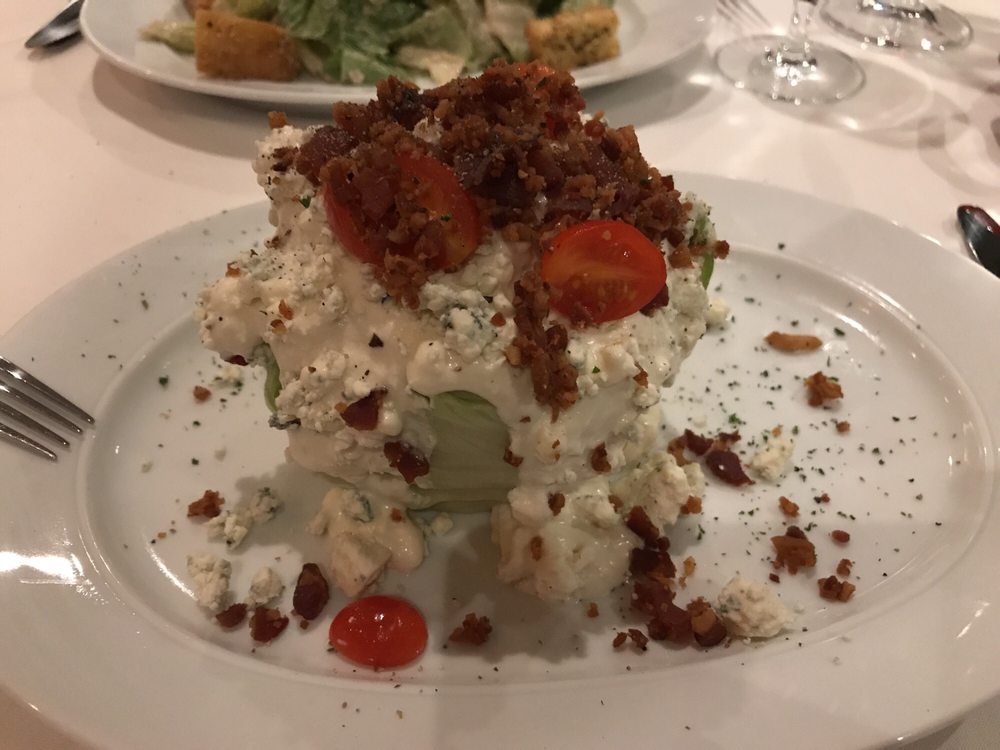 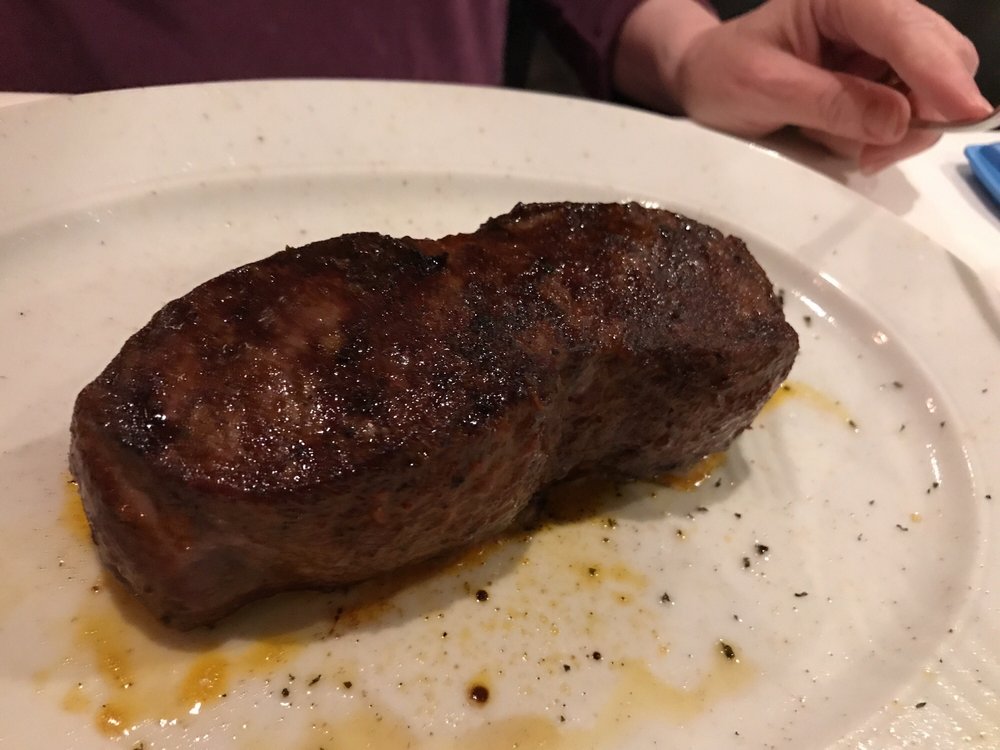 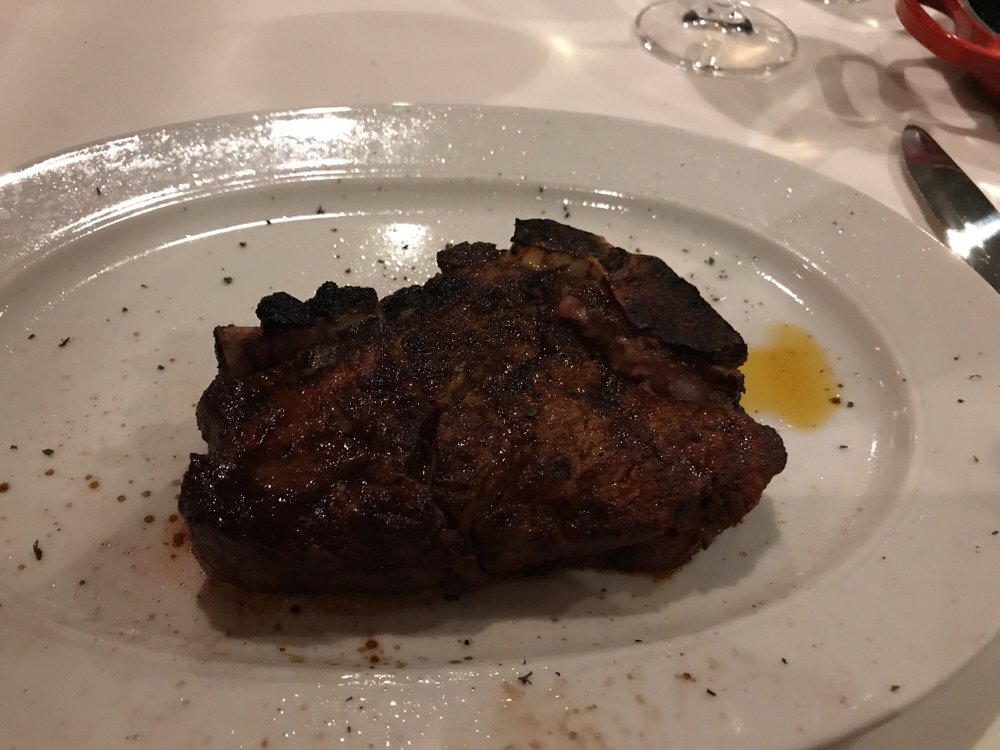 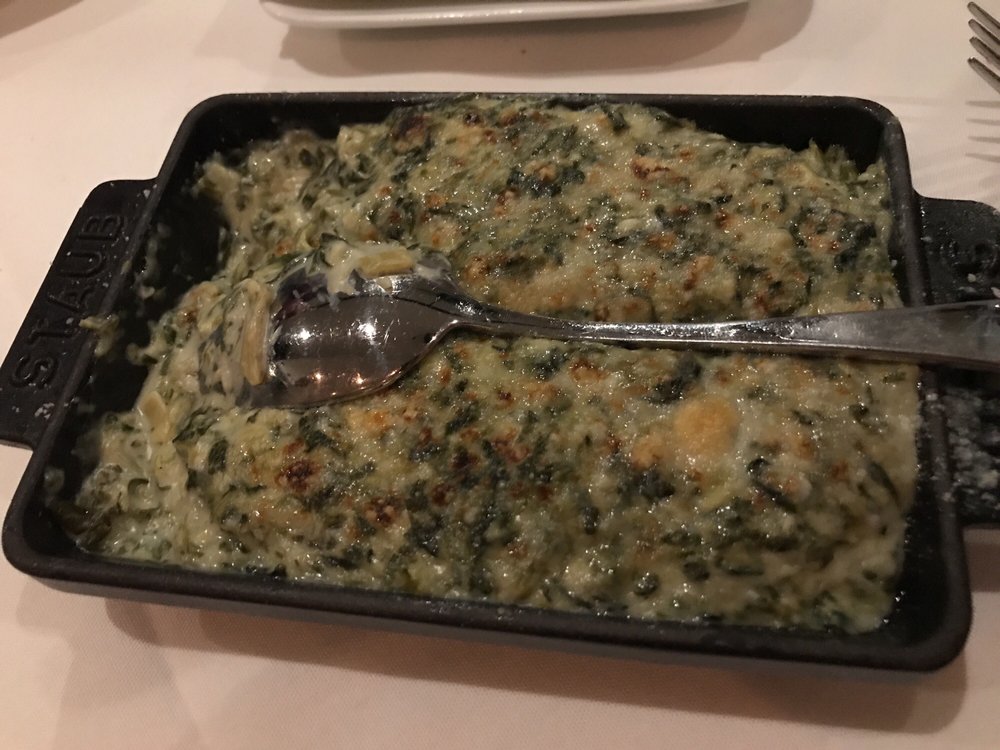 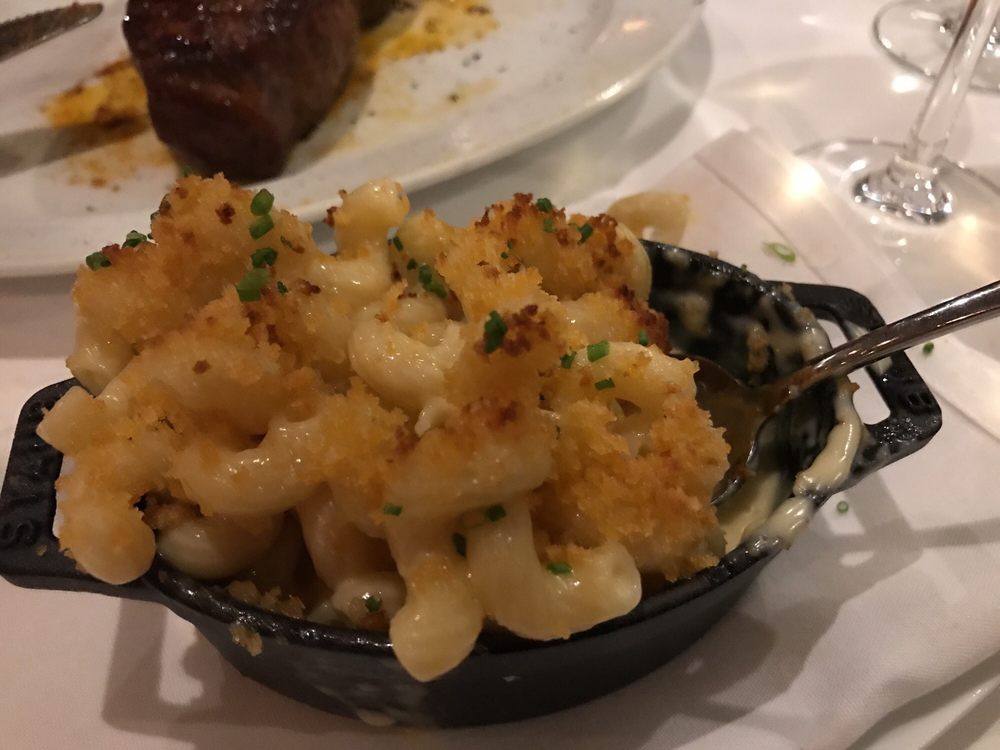 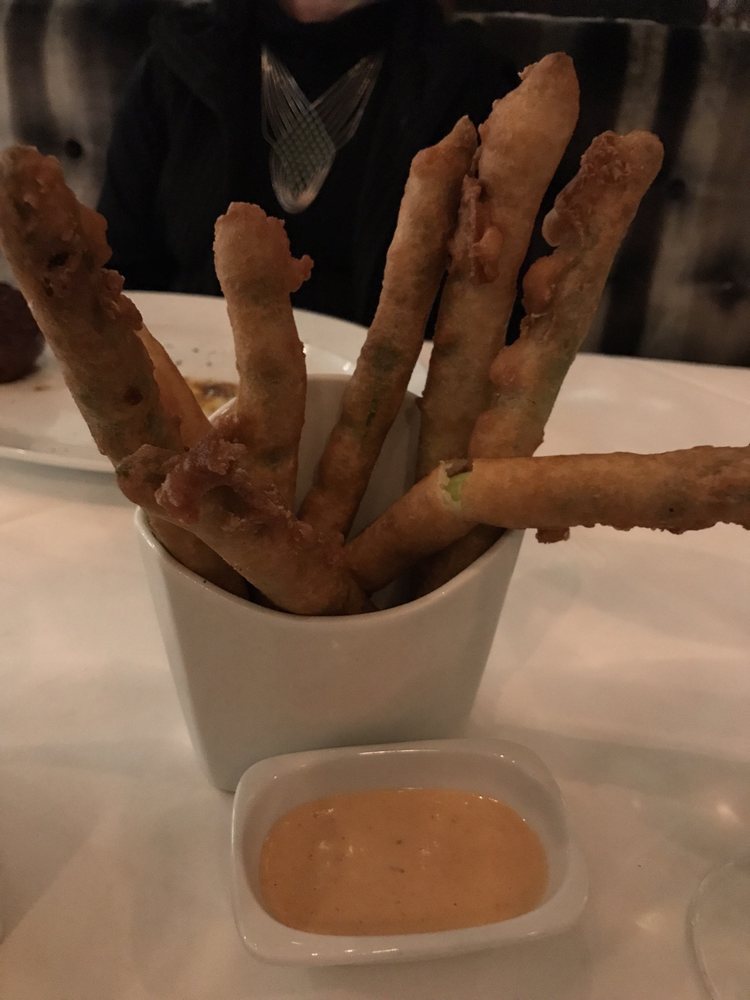 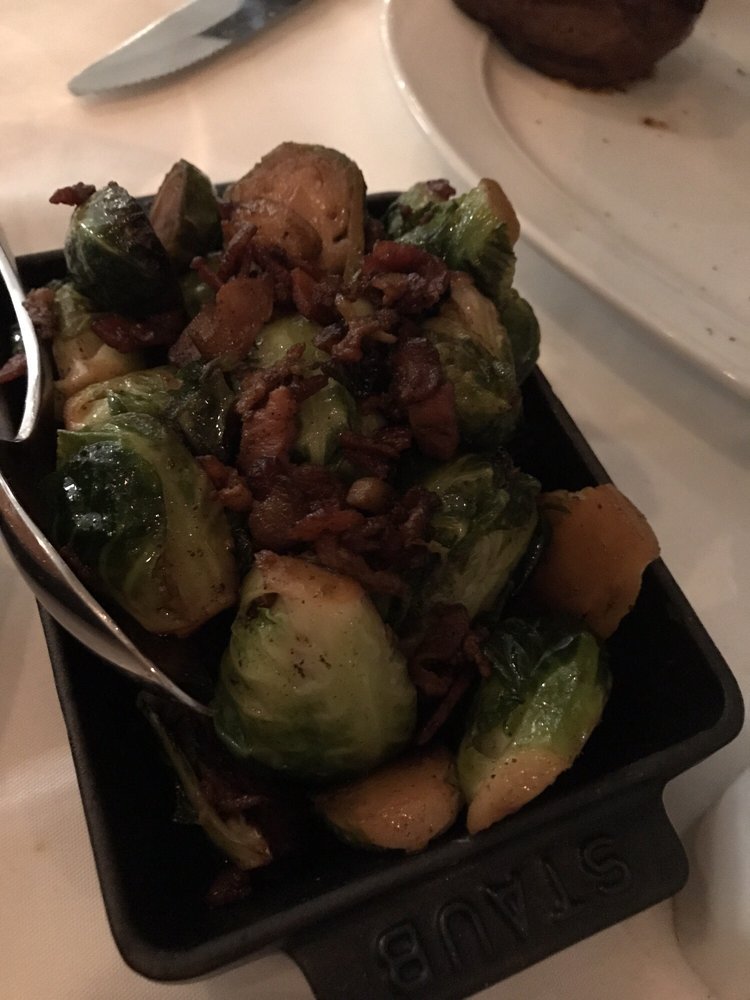 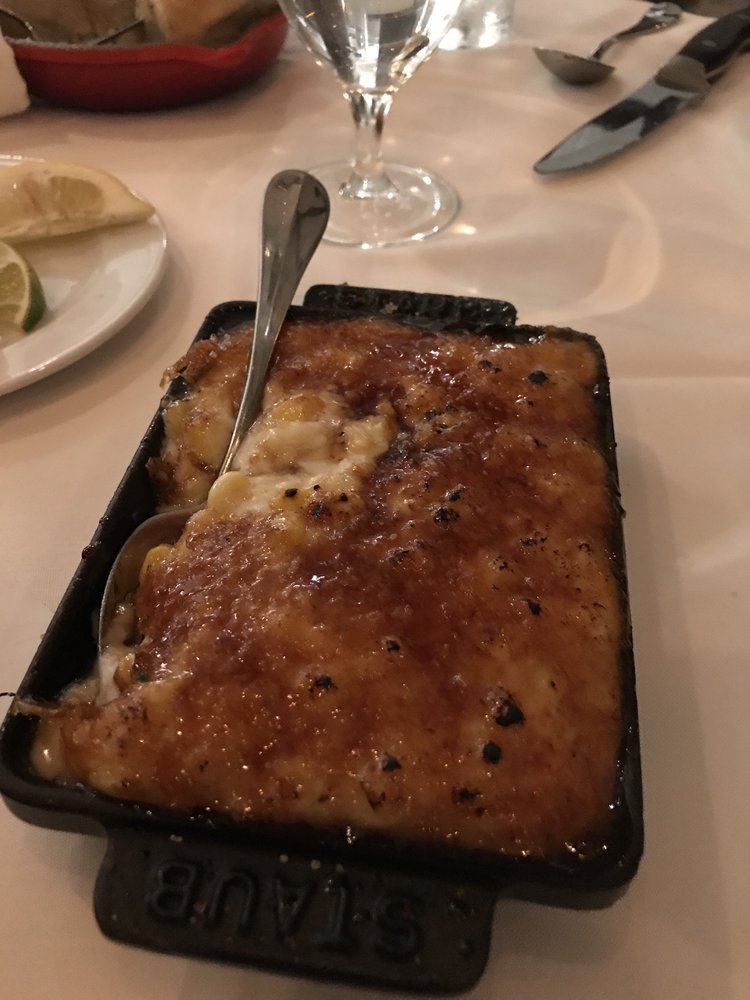 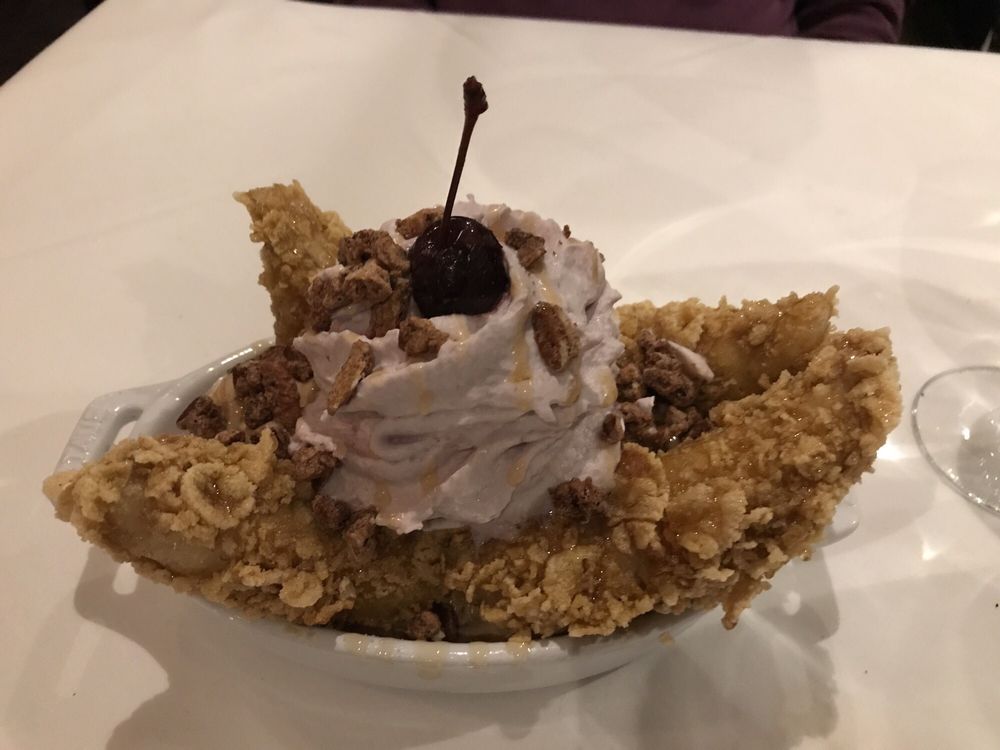 Steak 48 is from the team that used to own Mastro’s Steakhouse. The chef is Brian Key, who previously worked at Gibson’s.

It’s a very large restaurant, on two floors with a huge bar. Some of the rooms can get quite loud, so if you don’t want that, ask to sit in a smaller room. There are three glassed in tables back by the kitchen that are fantastic.

The music soundtrack is excellent, with upbeat rock mostly from the 70s and 80s.

We started with the shrimp cocktail, which is sold by the piece; it came with cocktail sauce and mustard sauce. We also tried the crab and avocado stack, which was made more interesting by a layer of crispy wonton.

On a second visit we had the PB&J pate appetizer and the crispy shrimp (which is almost identical to Bang Bang Shrimp at Bonefish Grill). Both were excellent and were, in my view, the best appetizer choices.

Caesar salad is traditional, and definitely has anchovies blended into the dressing. The only non-traditional element is a poached egg, which we skipped.

The wedge salad isn’t exactly a wedge, it’s the whole heart of a head of iceberg lettuce.

Steaks are cooked in a 1500 degree broiler and served on 500 degree plates. Do not touch.

My bone-in small filet mignon was nicely seasoned, but cooked beyond the requested medium, and the hot plate added to that. My companion’s NY strip was a much better choice, perfectly cooked to the requested medium rare, and was actually as tender as the filet and of course much more flavorful. It was the best steak I’ve gotten at a Chicago steakhouse. Even though it was also the “small” it was a generous 12 ounces, with no wasted fat to trim off.

For sides we had the mac and cheese, which was fairly light, and the creamed spinach which was nicely smokey.

On a second visit we had the asparagus fries and the Brussels sprouts, neither of which seemed remarkable. The corn creme brulee was interesting, but is very, very sweet, more a dessert than a side.

I would rate the food as good, but not exceptional, except for that NY strip. If you’re looking for a great steak, that’s the reason to come.

The wine list has a fairly high mark up, especially on the prestige bottles, but the wines by the glass are generous pours, so they aren’t quite as expensive as they appear.

Service was incredible, especially considering the place had been open four days. It’s the reason for the five star review. It’s the best service I’ve experienced at a Chicago steakhouse by far. The bus persons were measuring the distance from the edge of the table to the silverware as they set the tables, and when clearing plates they asked how we enjoyed each course.

Our server, Nadiyah, was extremely knowledgeable and personable, and even took time out to give us a tour of the restaurant. Kudos to management for assembling such an amazing staff so quickly.