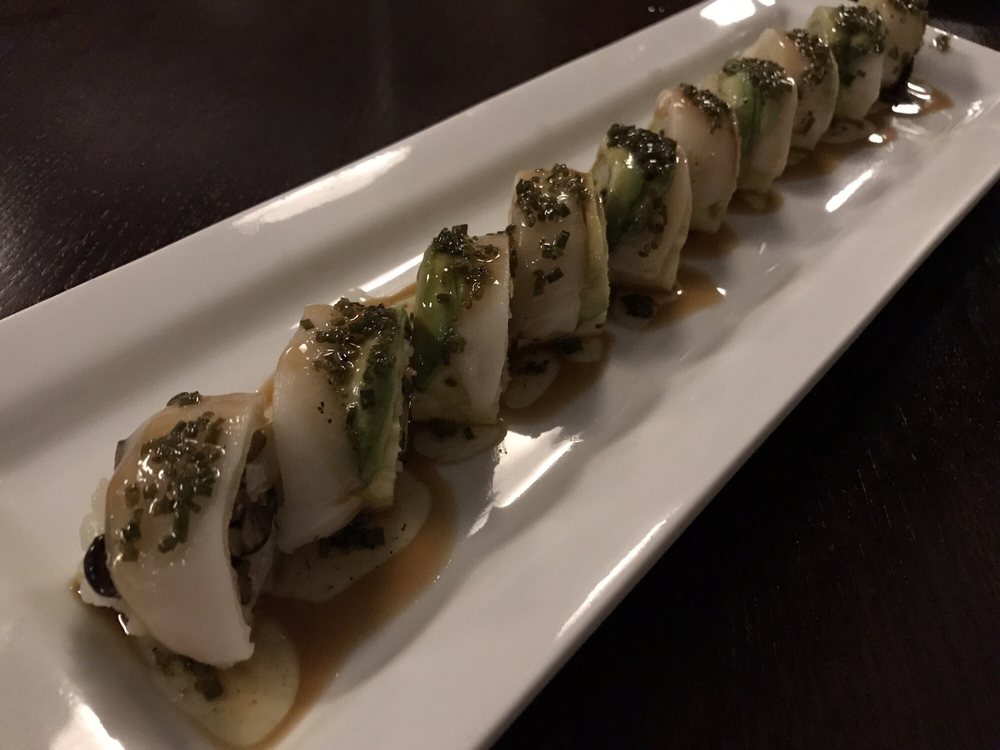 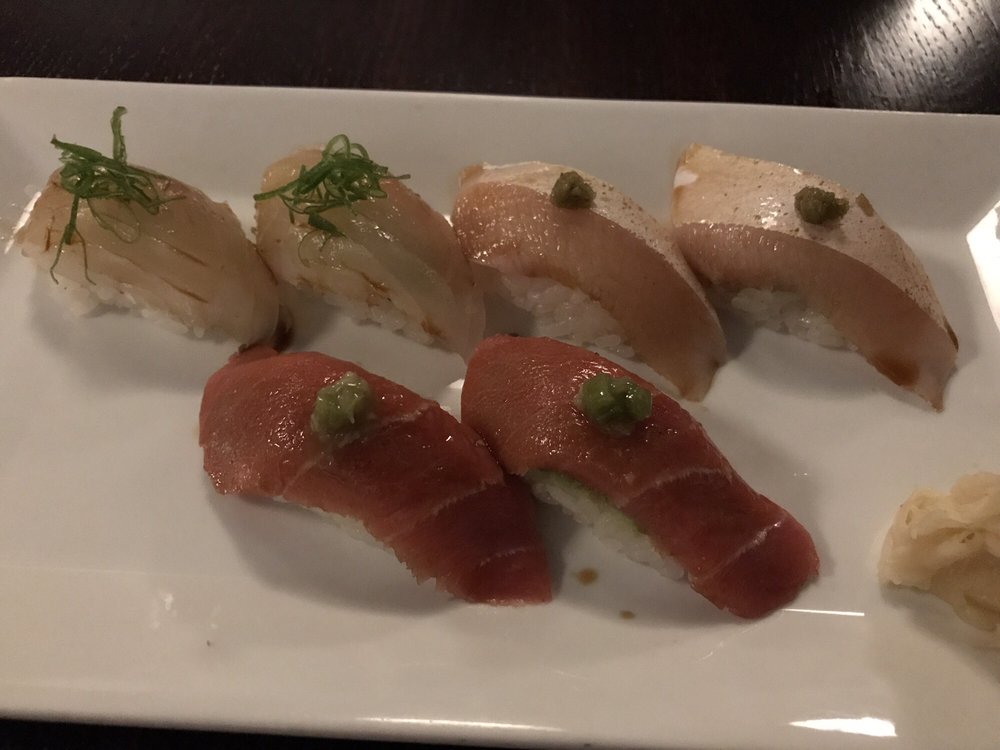 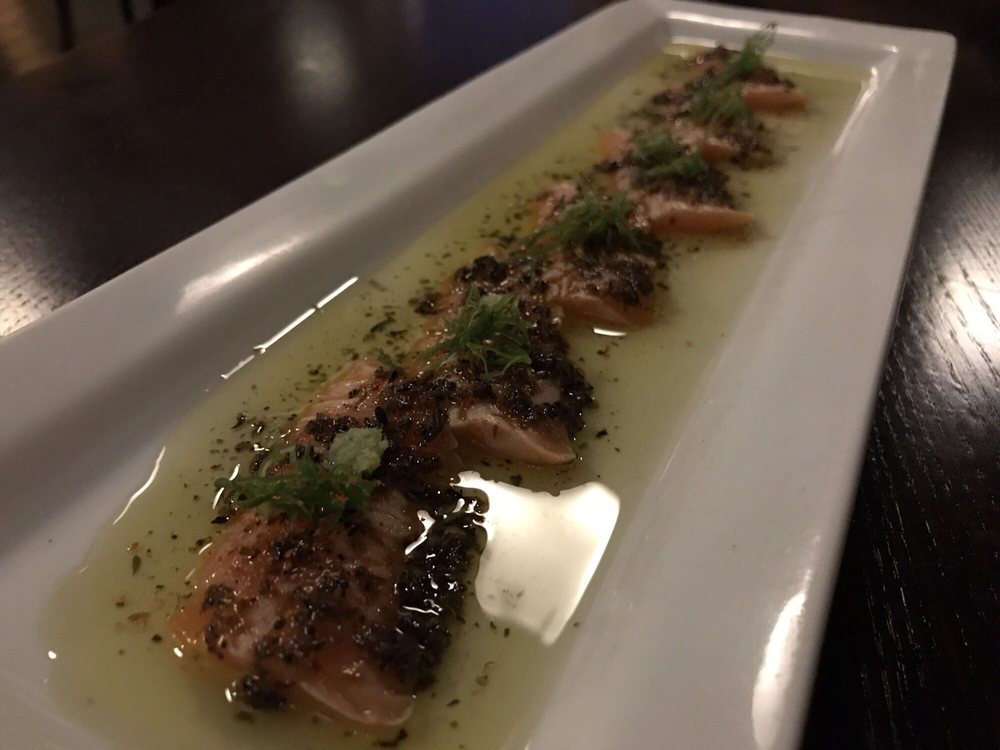 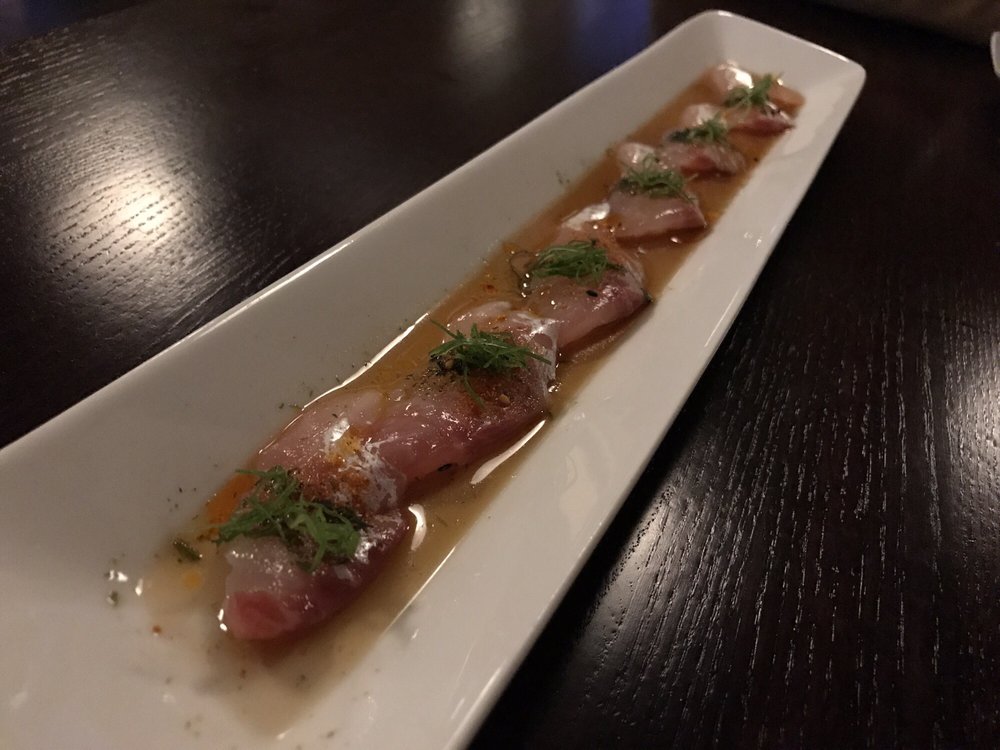 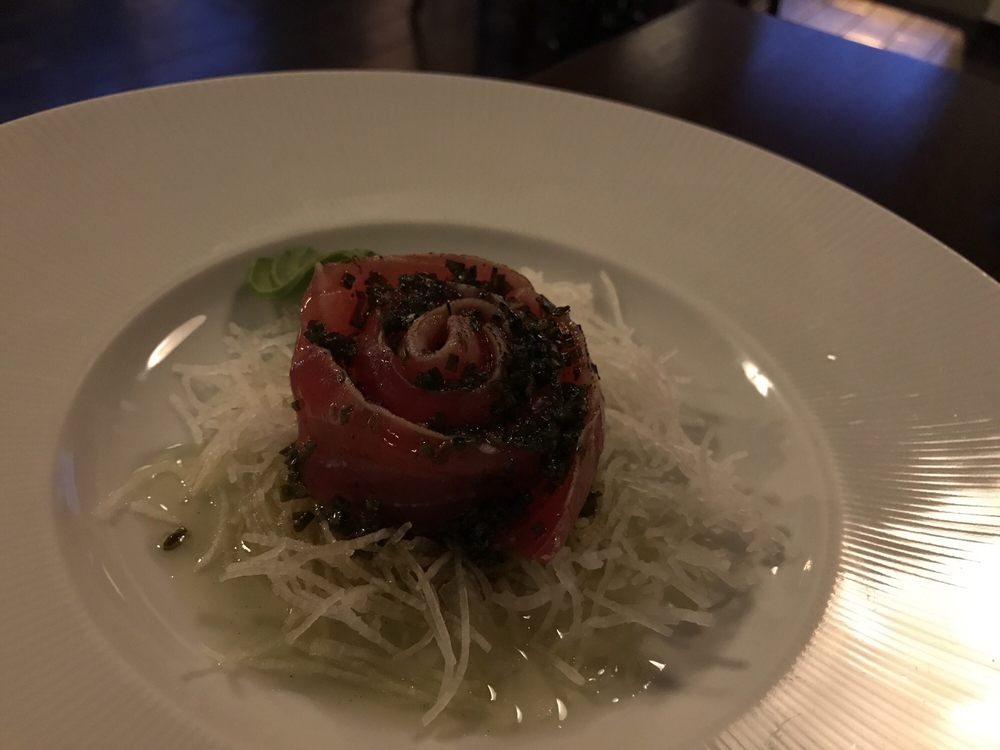 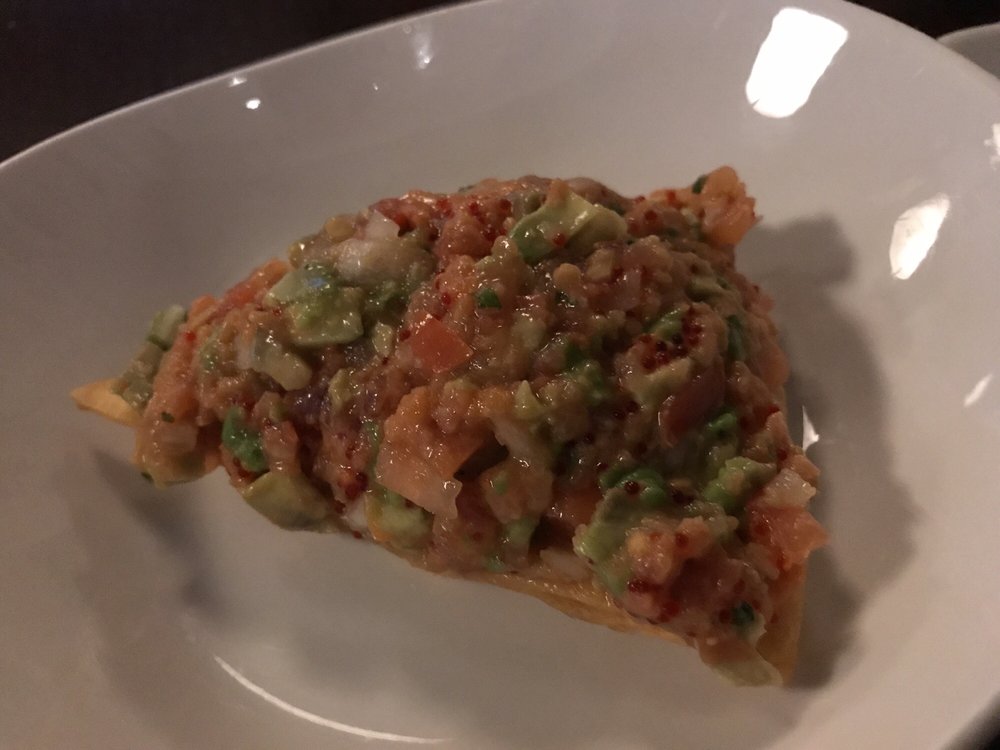 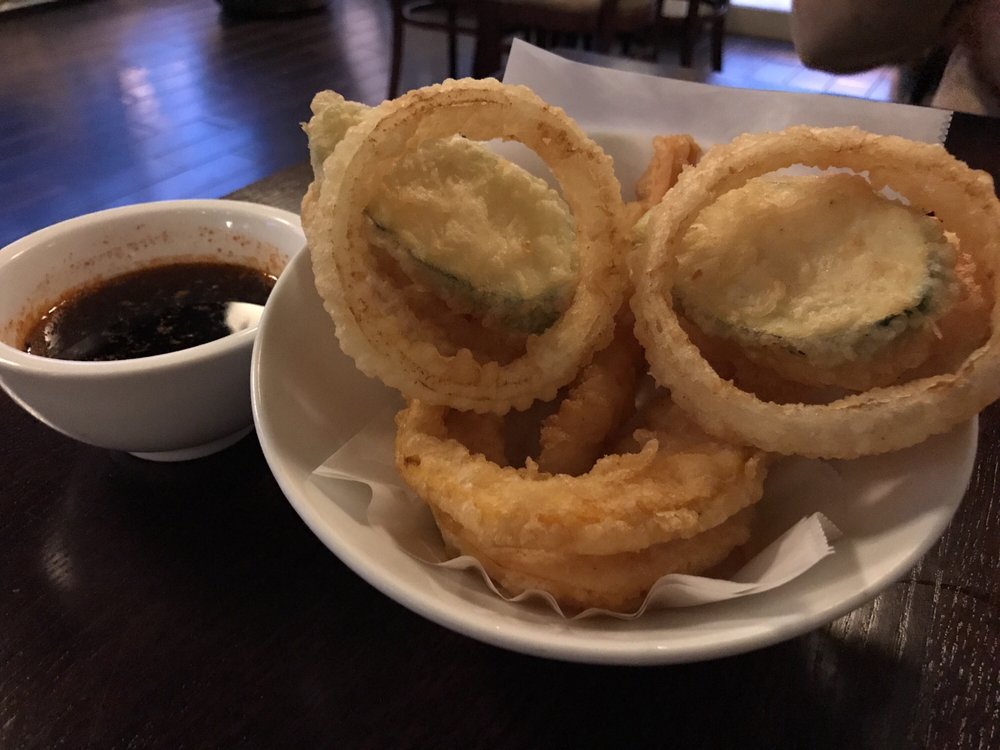 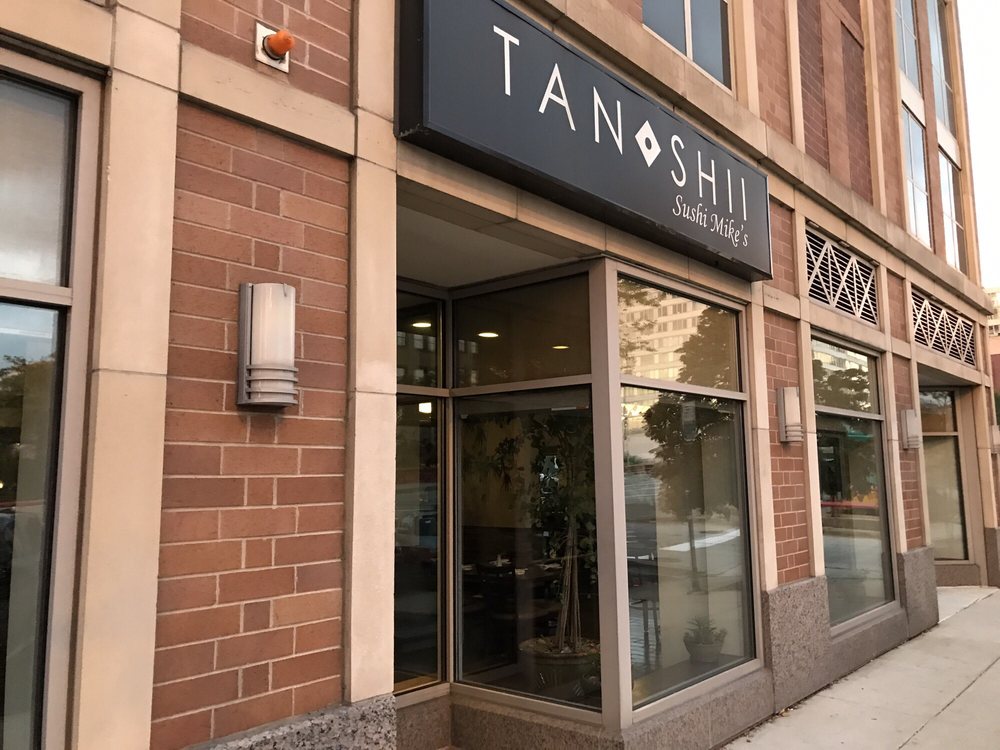 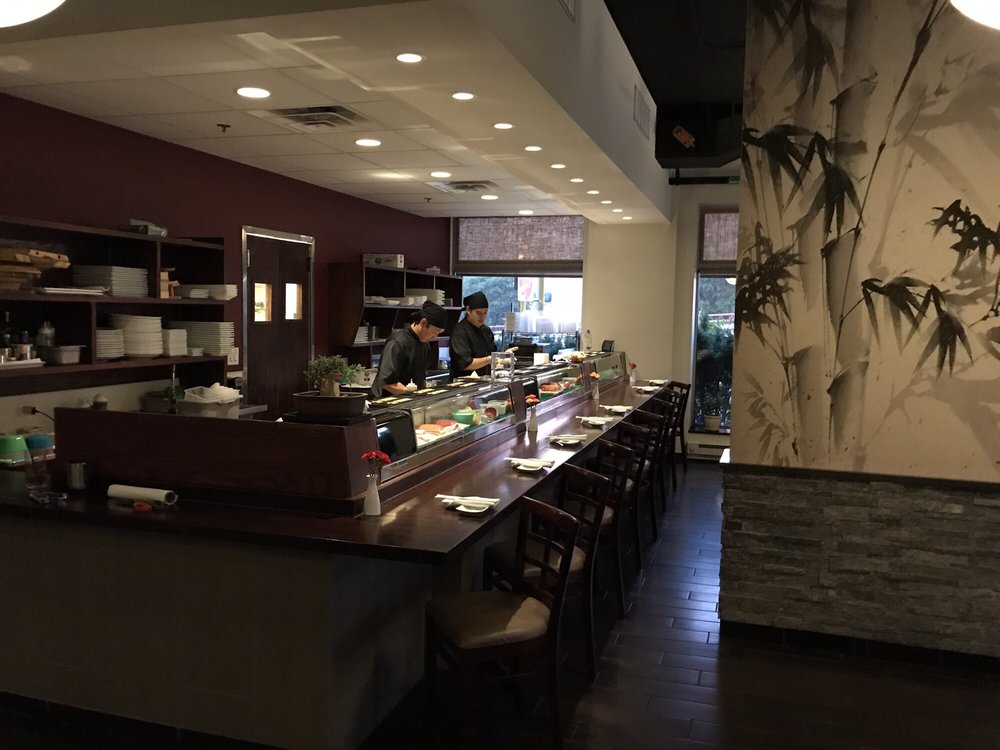 I keep looking for a world class sushi restaurant in Chicago. It seems a city of this size should have one, but I’ve tried all the likely contenders, and still keep looking. Tanoshii is another in that list. It is good, but not great.

We had the full omakase, which is how I judge all high-end sushi places. At our request it consisted of mostly sashimi. The omakase style places an array of fish on a plate and then adds sauces and seasoning. Here are the courses we had:

Tempura: this was my companion’s favorite course, which says something about the other courses, because she is a sashimi lover, not a tempura lover. We asked for it as our appetizer because of raves here on Yelp, and it was indeed a nice, light tempura preparation, but it will not change your life.

Fish and Chips: essentially a spicy tuna tartare, spread onto a wonton at tableside, it was fine, but better without the wonton.

Maguro Truffle: tuna shaped into a rose and topped with truffle oil. It was good, but I’ve had this dish elsewhere served with crunchy bits which really elevate it above this level.

Striped bass in ponzu chili sauce: this was the first of several sashimi courses that had a certain sameness. As my companion put it, “It’s drowned in oil.” In fact all of the sashimi was quite oily. Oil was even poured onto the rolls. The bass was surprisingly tough.

Seared salmon with Italian seasoning: this was an interesting flavor combination, with a distinct oregano flavor, but again, very oily.

Madai, hamachi, otoro: this was a nigiri course, and was one of the best–simple, flavorful, with excellent quality fish. Since this is what many diners will choose, it is the reason for my four star review.

Escolar wrapped around sauteed shiitake mushrooms: this was the best thing we had. It is an off-menu roll, but you can order it, and you should. It was unctuous and perfectly balanced, and by far the most complex item we sampled. True, it is also oily, but with a purpose, and if it is the only oily thing you have, it is a great choice.

The omakase came to $66 per person, which seems very reasonable to me. I would not have it again because of the oily repetitiveness of it, but I might return to Tanoshii for nigiri and tha mushroom roll.