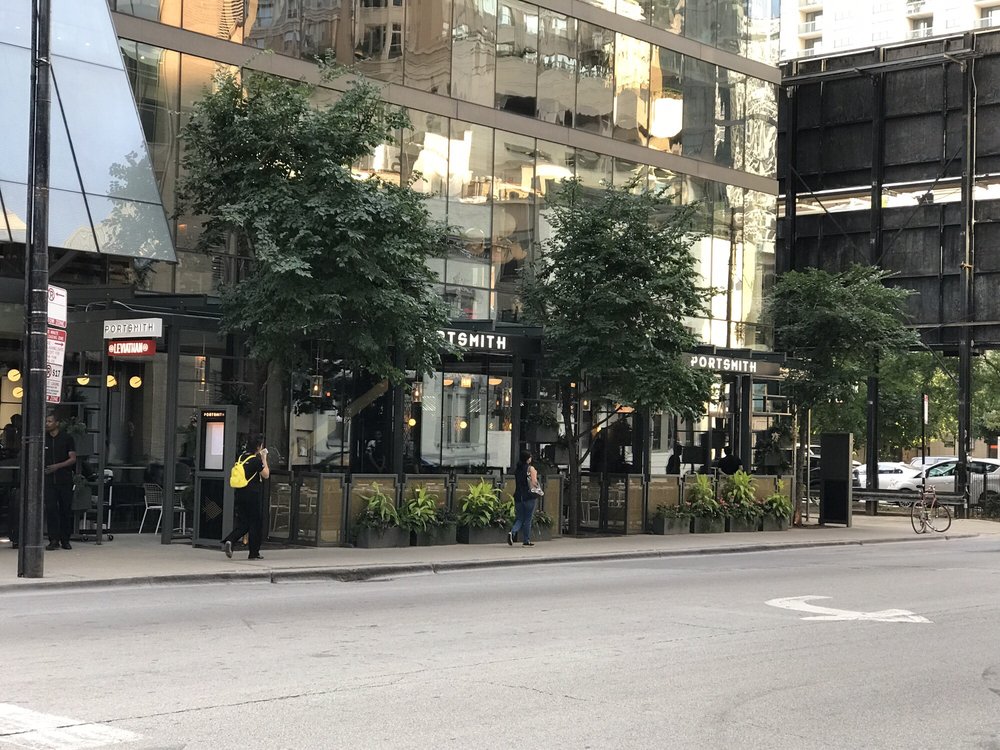 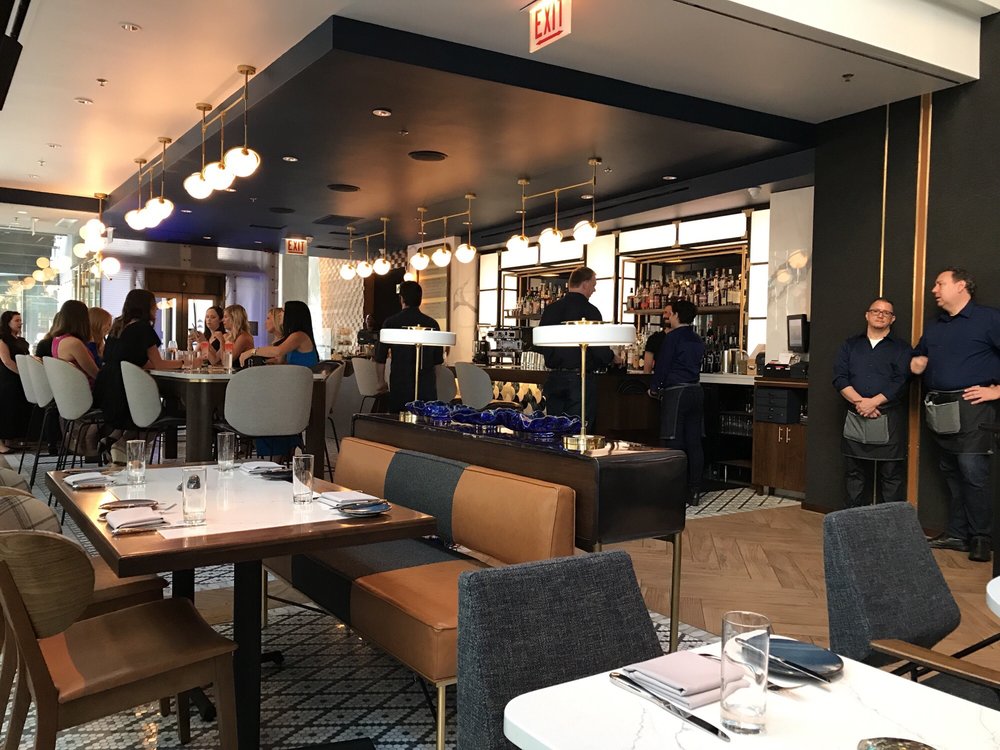 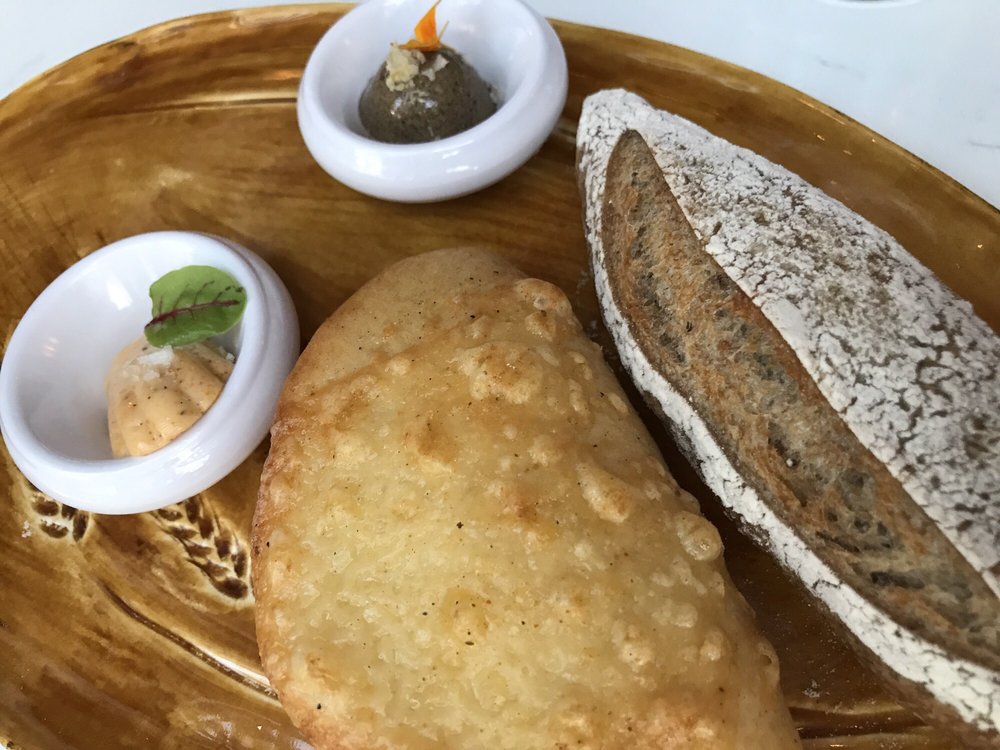 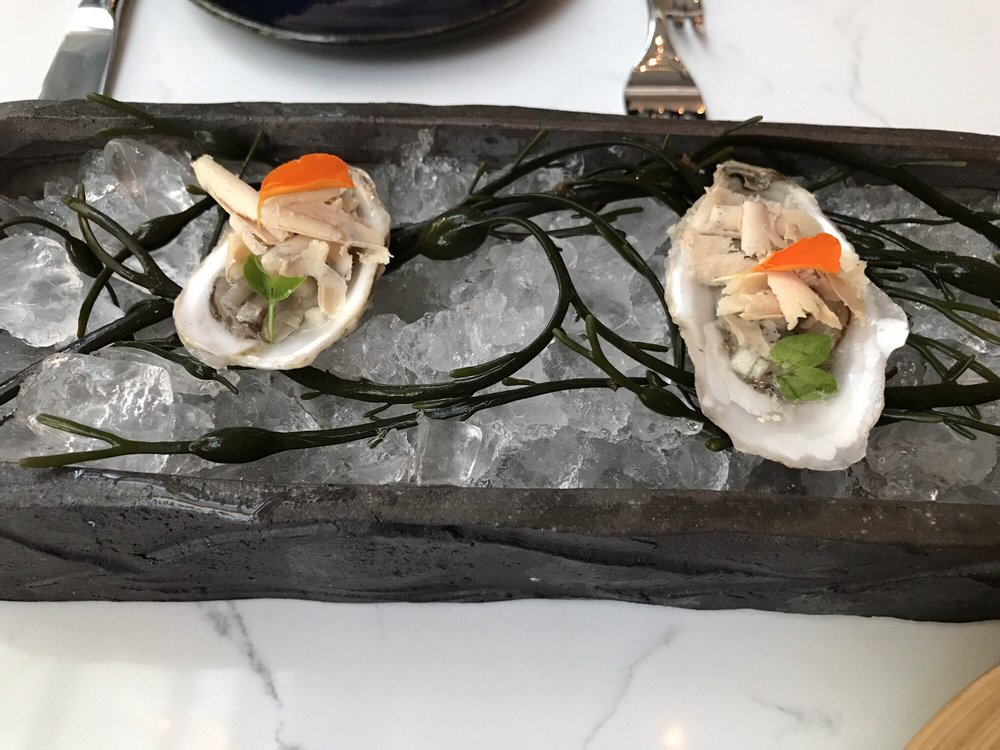 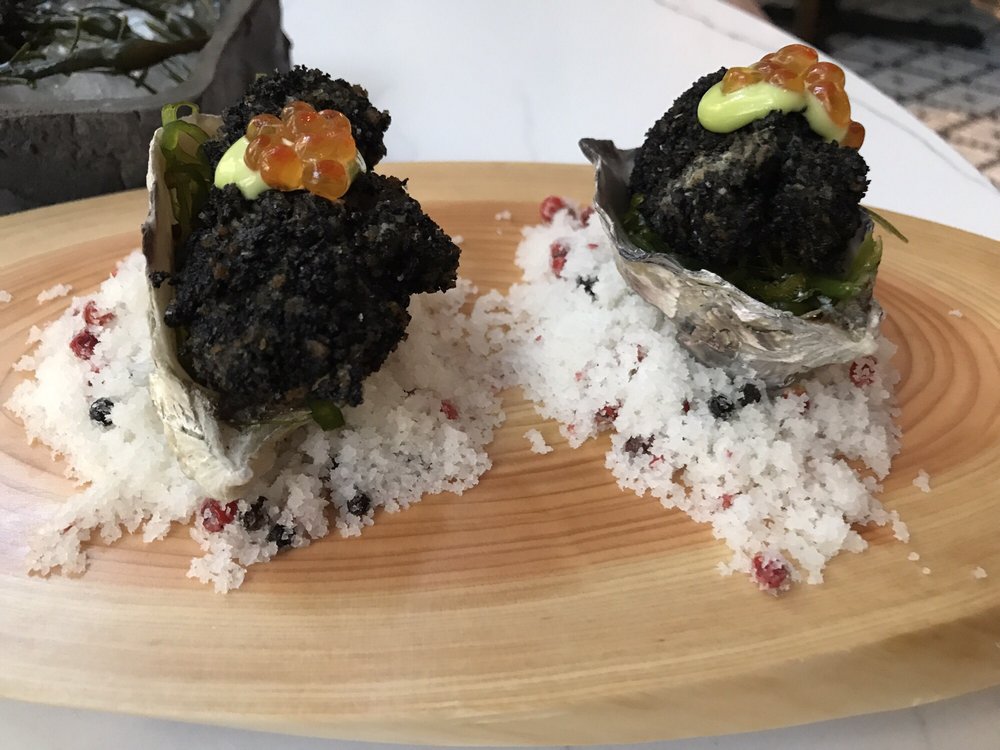 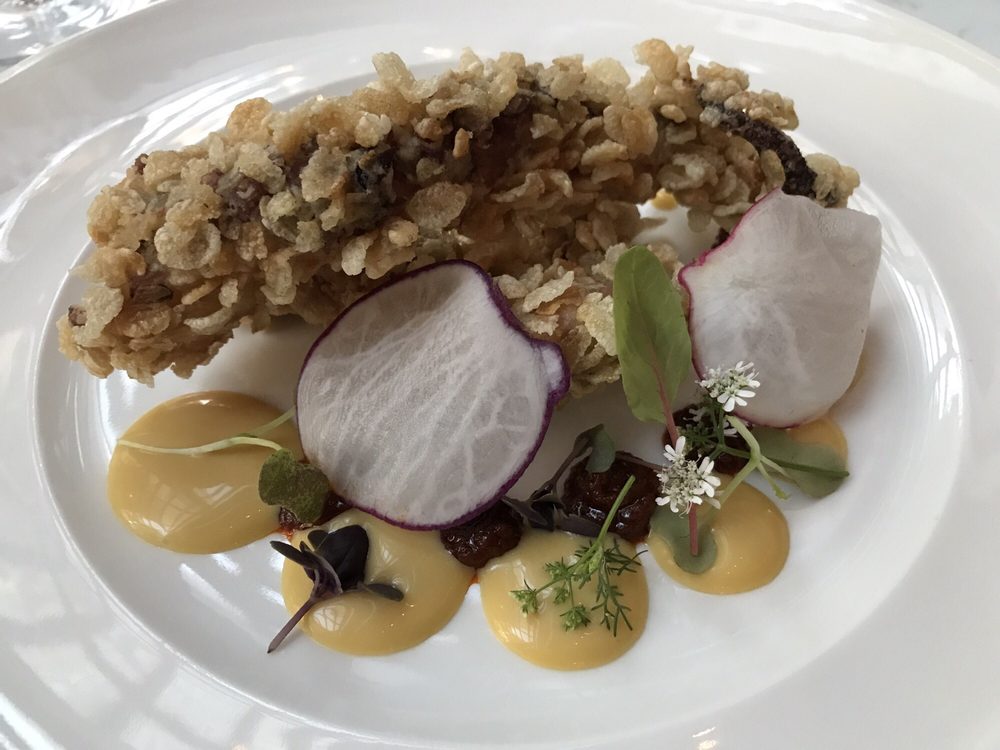 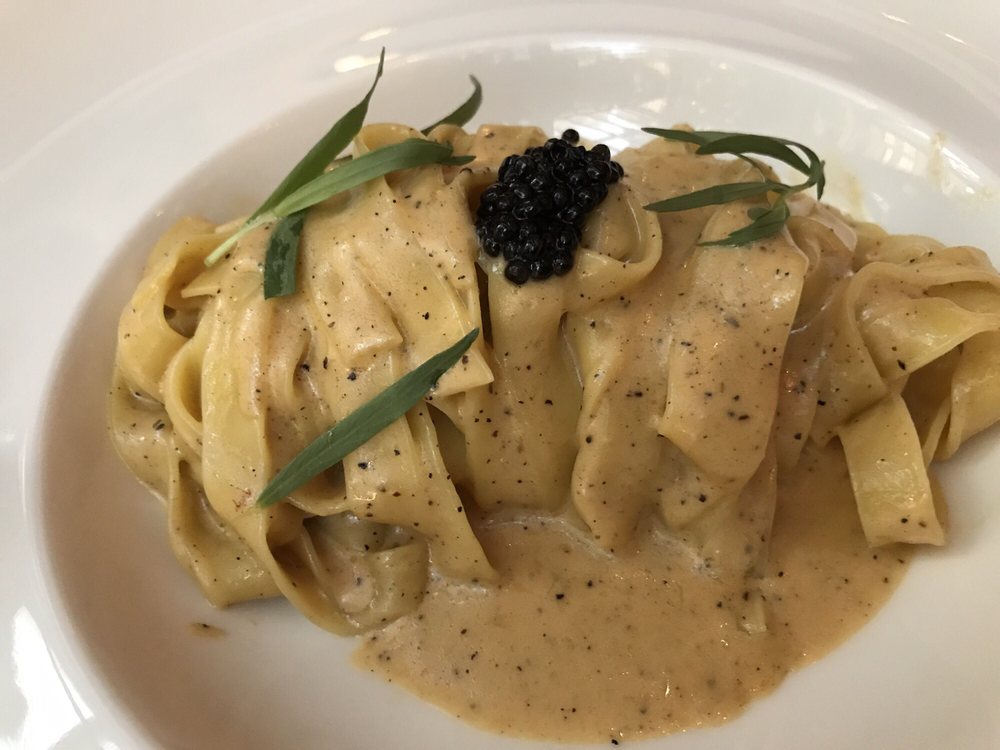 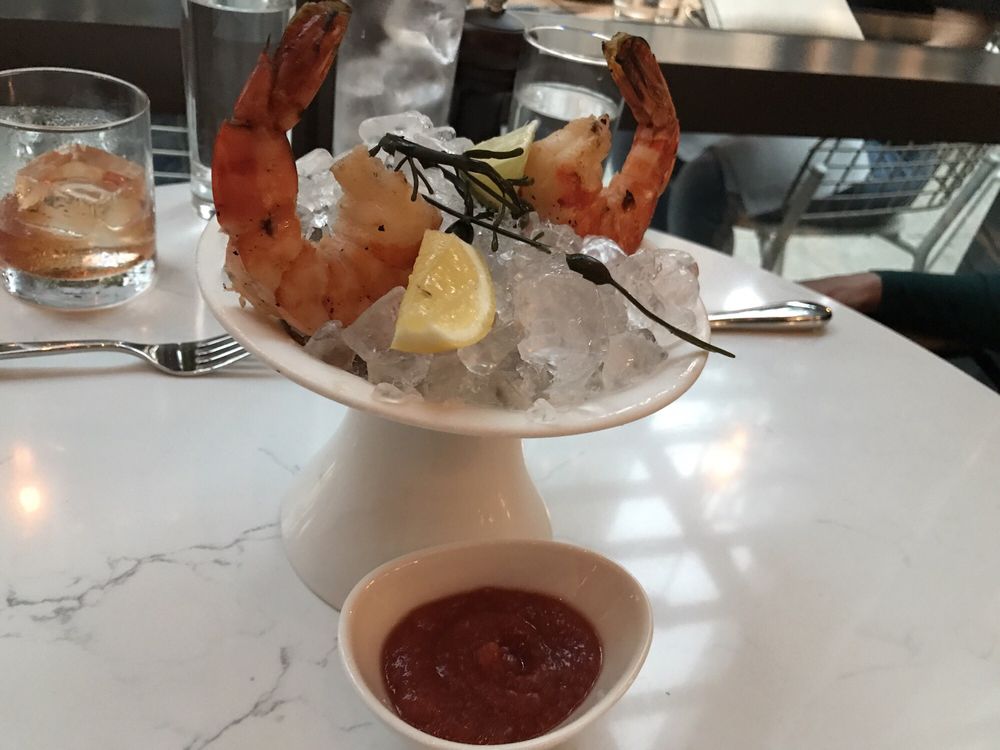 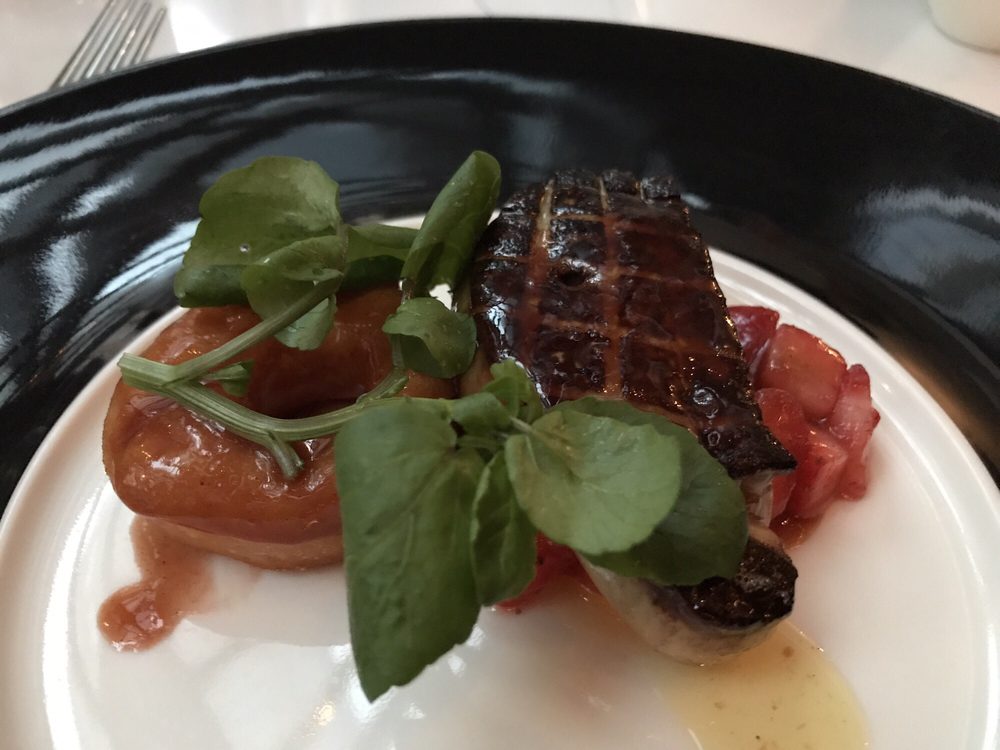 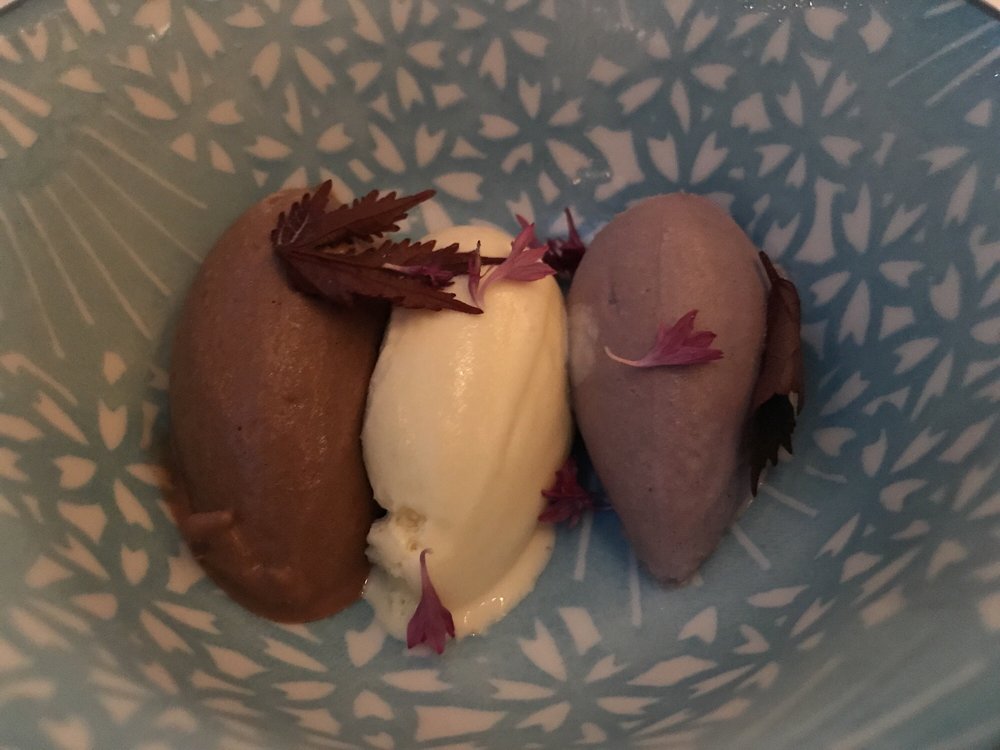 It’s always amazing to me when a restaurant that has only been open a few days is running smoothly, because it’s such a huge task to get the food, service, and ambiance right. But that was the case when we visited Portsmith during its first week.

The theme here is fish, and it is carried out in almost every course. Even the sourdough bread has bonito flakes in it. That bread was a bit chewy for my taste, but the flavor was good and the accompanying black garlic butter was delicious.

I preferred the Parker House Roll, which looked more like a pita and tasted like cheese bread.  Its companion old bay butter was also very tasty.

We tried both the fancy and the fried oysters. Fancy oysters include a bit of foie gras, but the primary flavors are yuzu and green apple. They were delicious, but pricey at $5 each. Fried oysters coated in squid ink panko and topped with trout roe looked more interesting, but were just okay.

The crispy octopus was indeed crispy, as it was completely coated in crunchy flakes. The accompanying citrus mayo and jam offset each other very nicely. One of the best octopus preparations in town.

The best thing we had was the Cacio e Pepe, a pasta dish traditionally combining cheese and pepper, but here it was Uni butter and pepper. The fettucini was perfectly cooked, and the sauce was rich and delicious (although it needed additional salt and pepper to bring out the flavor).

Charred shrimp cocktail was fairly conventional. The charring made the shrimp a bit too sturdy, but the cocktail sauce was excellent.

The least successful dish was the Foie gras and donut, which sounded really fun, but wasn’t. It was a generous serving of perfectly seared foie gras, crisp and caramelized on the surface, and runny on the inside. But the other ingredients on the plate didn’t really work. The donut was small, tough, and flavorless, and was no substitute for a more traditional brioche or even pear or apple slice. And the strawberry “jam” was really bits of marinated strawberry, too chunky to provide the needed sweetness in each bite. It was also nearly impossible to combine the disparate ingredients into a composed bite, something essential with foie gras.

The dessert list is very interesting, with each one accompanied by a different ice cream or sorbet. I opted instead for a sampling of those accompaniments. The chocolate sorbet was excellent, and the black rice ice cream exotic and intriguing. Tobacco ice cream was the most exciting idea, but just tasted like vanilla.

There is an interesting wine list, with a small selection of nicely varietal wines by the glass.

Service was almost too attentive. Three waiters, two bus boys and a manager kept clearing away every dish and glass, even when we wanted to hang onto them, and often while someone else was still eating. The restaurant wasn’t very busy yet, so perhaps they just needed something to do, but it became funny after a while. It’s commendable that they want to provide good service, but I think they need to relax just a tad!

One pet peeve is that at the beginning of the meal we were told that “Chef wants you to order everything at once.” That’s simply not acceptable in a sharing plates restaurant. You don’t know everything you’re going to want at the start of the meal, or what order you’ll want it in. I’ve played this game before and ended up with a table full of food that the chef was supposedly going to course out for us. I’d rather do that myself.