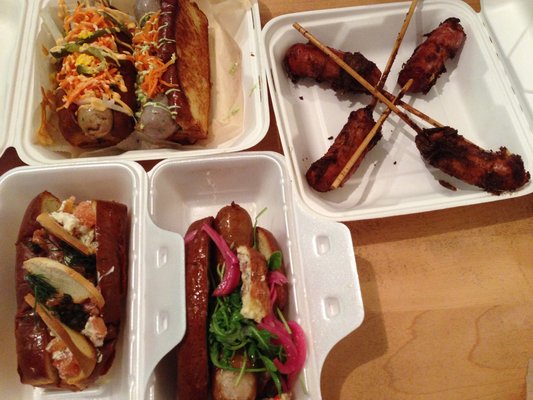 So if you’re in the mood for a hotdog, this might not be the best choice, since there’s even a sign saying they don’t do Chicago dogs. They also don’t do anything else recognizable as a conventional hotdog. But they do make some interesting gourmet dogs.

We tried three that were somewhat similar: Banh Mi, Tur-Doggin and (the day’s special) Quiche Dawg. All were based upon interesting sausages with a number of savory toppings, and all tasted somewhat similar. Interesting, but perhaps not gourmet.

We also tried the mystery corn dog platter. To me, the mystery was how anyone could mistake these for corn dogs! There isn’t a conventional cornbread coating, just a thing slurry of paste that has been deep fried to a crunchy consistency. There were several different sausages involved; the only clearly identifiable one was lamb.

The best dog was actually not a dog, it was the Slammin’ Salmon, which was sort of like lox on a bagel but in a bun.

Speaking of buns, that’s probably the best thing about the place. Rather than conventional hotdog buns, they use squared off chunks of bread that are grilled with butter to a nice golden brown.

If you’re looking for something different–and by that I mean different from a hotdog–it’s worth a try.